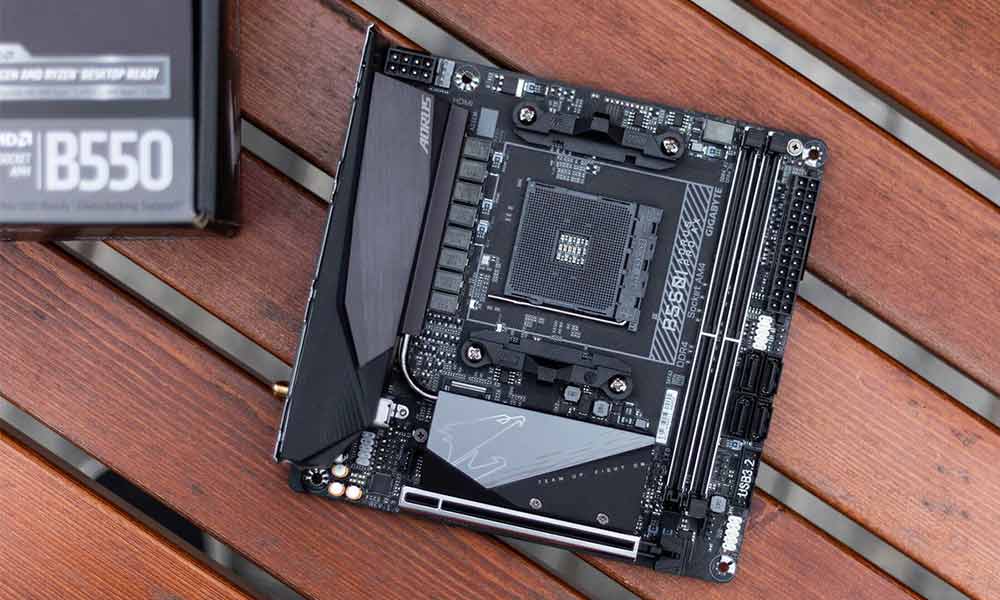 This is our review guide for the best b550 motherboards in 2022.

The B550 chipset is the successor to the B450 and sits in the middle of AMD’s chipset hierarchy with the X570 motherboards being at the top and A520 motherboards at the bottom.

And Although there are some budget X570 motherboards cheaper than some flagship B550 motherboards, these are exceptions rather than the norm.

Being in the middle, the B550 motherboards offer a good balance between the price and features. 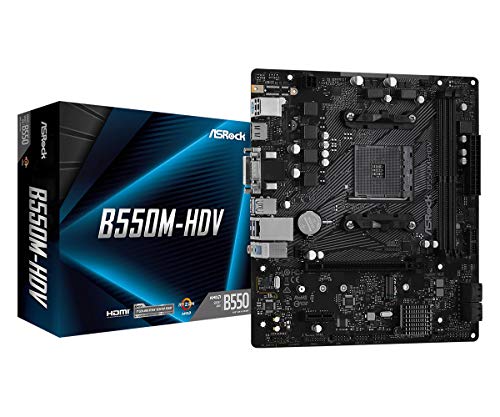 AMD has made some notable improvements in the B550 chipset such as the inclusion of PCIe 4.0 that was only available in X570 motherboard before (while the chipset itself supports only PCIe 3.0, the B550 motherboards get it via the CPU lanes), four SATA connections (it was two in B450), WiFi 6, and multi-GPU SLI/CrossFire support (B450 chipset only supports Crossfire).

Another advantage B550 has over its predecessor is the native support for Ryzen 5000 processors, which is why we have recommended some of them as suitable motherboards for ryzen 5600X and 5800X CPUs.

So if you’ve found these reasons convincing enough, then your next step would be getting a decent quality B550 motherboard.

To save you from hours of research, you have compiled this list of Best B550 motherboards in the market right now.

ASRock as a brand is known for making value-oriented PC components that punch above their weight. And B550M-HDV is not an exception.

It has a fairly good design for a budget motherboard, with Black PCB having silver-colored diagonal lines.

The I/O options include four USB 3.2 Gen 2 ports, two USB 2.0 ports, one LAN port, and single ports for each of DVI, HDMI, and VGA. The notable exceptions are the Type-C port and DisplayPort.

To increase the number of USB ports, you also get a single USB 3.2 Gen 1 header and two USB 2.0 headers.

You also get four SATA ports and a single M2 slot (that operates on PCIe 3.0 standard) for storage. For GPUs, you get a single PCIe Gen 4 x16 slot. It’s not metal-reinforced so you’ll have to think twice before using a high-end graphics card here.

So as you can see, all the basic features that you can expect in a motherboard these days have been provided by ASRock here.

It costs roughly 80 bucks so it would be unfair to be much critical here. Still, we would have liked more DIMM and M.2 slots because you get very limited expansion options by this current setup. Plus, you only get a 4-pin 12V CPU power connector which, along with its 4-phase power design, limits the overclocking potential of your processor.

In case you want to remain in this price range and can live without the PCIe 4.0, you can check out our A520 motherboards review guide as well.

Next up we have the Asus TUF Gaming B550M-PLUS.

Its design is similar to what we have seen in other TUF series keyboards, graphics cards, and Cases.

Here you get a dark grey PCB with black colored M.2 heatsink, VRM heatsink, and DIMM slots. This PCB and these various heatsinks also have some diagonal white lines that make a good contrast with the main colors.

The socket is not too open which means you would have to check your cooler’s compatibility before making a purchase. On the right side of this socket area, are the four DIMM slots that can have as much as 128 GB RAM (32×4) and a maximum speed of 4600 MHz if your CPUs allows.

On its top side, there’s the 8+2 DrMOS power stage design with TUF capacitors and TUF chokes. For efficient power delivery, Digi+ VRM has been used. This makes sure that you can use this board with even the high-end Ryzen 9 processors. This setup is cooled as a whole by two VRM heatsinks.

For display options, it comes with DisplayPort and HDMI – in case you pair it up with a Ryzen APU instead of a CPU.

On the bottom side of this board, there are two M.2 slots. The bottom slot supports PCIe 3.0 and comes with a heatsink that cools it down as well as protects it. The top one does not include any heatsink which is weird considering that it supports PCIe 4.0 standard.

On either side of this bottom M.2 mount, you’ll find a single PCIe x16 slot. The top one is armored and supports PCIe 4.0; while the bottom one is no such armor and comes with PCIe 3.0. There’s one additional PCIe 3.0 x1 slot above the top M.2 slot as well.

The relatively weaker audio performance, a limited number of SATA ports (with awkward position), no pre-installed I/O shield, and relatively higher price are the things we didn’t like here. And its non-minimalist design will not be everyone’s cup of tea.

But TUF B550M-PLUS is still a compelling option for mATX builds. And since mATX boards are so rare these days, it’s pretty easy to ignore these downsides.

The next board we’re going to explore is the Gigabyte’s B550I Aorus Pro AX.

As suggested by the name, it’s a mini-ITX motherboard and comes with WiFi AX (also known as WiFi 6).

But as good as these features are, this board is much more than that.

It comes with a rather neutral color scheme where PCB is colored black while the heatsinks and rear I/O shield has colored dark-grey. Although some of you may find this scheme bland, one advantage it has is that it can easily mix with the rest of your PC build.

In the middle, there’s the socket area that’s quite big for a mini-ITX board.

On the right side of this area, there are two armored DIMM slots in a dual-channel configuration and support up to 4866 MHz speed – although we would recommend you to not go beyond 3600 MHz CL16.

On the bottom-right side of these slots, and below the 24-pin ATX 12V power input, are the four SATA connectors with support of RAID 0,1, and 10 technologies.

There are two M.2 slots in Arous Pro AX. The first one is above the single PCIe x16 slot at the bottom of the board, comes with a heatsink, and supports PCIe 4.0; while the other is located on the back and supports PCIe 3.0.

The PCIe x16 also comes with PCIe 4.0 and is metal reinforced. On its right side, there’s the audio setup which is powered by the Realtek ALC1220-VB HD audio codec

The power delivery heatsinks are connected to the chipset heatsink and M.2 heatsink. Unlike in some X570 boards, there’s no heatsink fan here but its large mass more than makes up for it.

The I/O panel comes with an integrated shield and consists of what you’ll typical get in an upper-midrange board these days: two USB 3.2 Gen 2 ports (one Type-A and Type-C), four USB Gen 3.2 Gen 1 Type-A ports, a 2.5 GbE port, two HDMI 2.1 ports, one DisplayPort, two antenna ports for the Intel AX200 interface (for Wifi-6 and Bluetooth 5.0), and a Q-Flash Plus button.

Like many other mini-ITX motherboards, Aorus B550I Pro AX is a little short on 4-pin fan headers. There are three of them in total. One is for CPU fans, while the other two are for case fans. With just a single PCIe x16 slot, there’s no SLI/CrossFire multi-GPU option either.

Costing almost 180 bucks (at the time of this roundup), this motherboard is not cheap. It’s actually expensive than many budget X570 motherboard.

But with goodies like WiFi 6, 2.5 GbE, and top-tier VRM design, and good CPU overclocking, the Gigabyte B550I Aorus Pro AX is worth its money.

Yes, the B550 chipset is better than its predecessor in several ways, including Multi-GPU support, PCIe 4.0 inclusion, and more M.2 slots.

It depends on what you mean by future-proofing.
If you’re thinking to pair a B550 motherboard with any Ryzen 5000 CPU, then yes, it’s future proof and won’t require any update for at least 2-3 years.
But if you are thinking about using it with next-gen Ryzen CPUs (6000/7000), it’s too early to predict. There’s no word from AMD on this topic as of now, but the chances of its compatibility are pretty slim considering the ageing AM4 socket that’s overdue an upgrade.

It depends on what features you require in your board and your budget.
The X570 chipset carries more PCIe 4.0 lanes, support 3000-series APUs, come with more SATA/M.2 slots, and is better suited for overlocking. But all these goodies make those motherboards more expensive as well.
So if you don’t require too many SATA/M.2 slots, don’t want extreme-level overclocking, and can live without features like 10G internet, b550 boards will be a good option.

Can any motherboard fit in any case?

No, you have to consider form factors such as mini-ITX, mATX, ATX, and eATX before going for a PC chassis or motherboard.
Larger chassis can fit a smaller motherboard but not vice versa. Ideally, though, a motherboard and chassis should have the same form factor, e.g., a mini-ITX case for a mini-ITX motherboard.

What does M mean in the motherboard name?

A motherboard name mostly consists of following pattern: <Manufacturer> + <Series (optional) > + <chipset name> + <model name>.
An example of this can be Gigabyte Aorus X570 Elite WiFi.
But sometimes, you’ll notice a letter such as I or M behind the chipset name, such as B550M. It refers to the form factor of that motherboard. While ‘I’ means it’s a mini-ITX board, ‘M’ means it’s m-ATX.

What does AC mean on a motherboard?

You’ll also notice the letters AC at the end of a motherboard name sometimes. It simply means that they have a built-in WiFi-AC module. Many latest motherboards are coming with AX letters instead, which means they have a newer WiFi version, called WiFi 6 or WiFi AX.

Does the I/O shield come with the motherboard?

Yes, I/O shield comes with all new midrange/premium motherboard these days. But some cheap models may not feature it because of their low price, so make sure to read specs before purchasing.

How tight should motherboard screws be?

There’s no need for you to be forceful with the screws. Just screw them to the point where they stop turning, and you’re good to go.