The Ryzen 7 is the mid-tier series in AMD’s desktop CPU hierarchy. While Ryzen 3 and 5 series are specifically targeted towards gamers, and the Ryzen 9 is preferred by professionals and content creators, Ryzen 7 CPUs provide all-round performance and score well in both areas.

The Ryzen 7 5800X is the latest addition in this series and provides a good improvement over its predecessor, the Ryzen 3800X, despite both of them having the same specs for the most part. 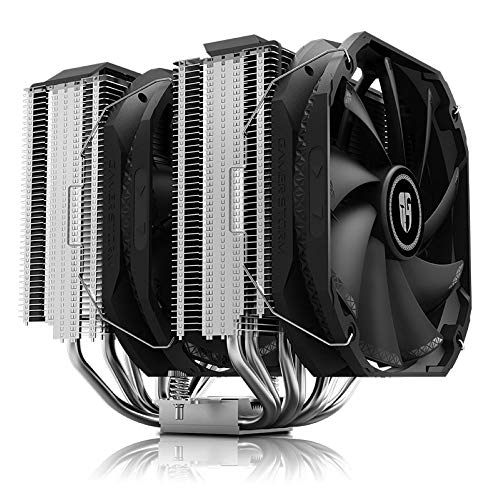 But to have any CPU perform to its full potential, you must pair it with an adequate cooler as well. Before the Ryzen 5000 series, AMD used to provide a stock cooler with almost all of their Ryzen CPUs. In Ryzen 5000, however, they only did so with the Ryzen 5 5600X.

This means it is up to you, the consumer, to have a reliable thermal solution for your Ryzen 7 5800X.

To make it easier for you, we have compiled this guide of the best coolers for 5800X. You will find that each entry on this list is accompanied by a short review and a set of pros and cons.

We have ensured that we’ve included coolers at very diverse price-points so you can find a match no matter the size of your wallet. Without further delay…

We would not call Scythe the most recognizable brand on the planet. However, they make award-winning coolers.

In 2015, they earned an “Excellent” award from Hardware.info for their Fuma radiator.

Previously, they won the Best Cooler of The Year in 2014 from the same publication. While they may not be as famous as the other brands on this list, you can still expect some exceptionally crafted coolers from them.

The Scythe Mugen 5 Rev.B is exemplary of this fact.

The first thing you need to know about it is that it’s a tower cooler. Thus, you should make sure that you have enough clearance inside your rig before you purchase it. Just how much clearance do you need though?

It weighs just under a kilogram (890 grams to be exact). Despite its size, it has extremely good RAM compatibility, although it depends on your motherboard as well.

Nevertheless, the radiator fins have a cut out to ensure that if it does encroach on the RAM sections of your motherboard, you can install your RAM underneath.

Not only is this cooler compatible with AMD AM4 socket (for Ryzen 7 5800X processors) but it can also be fitted to most of the latest Intel sockets too.

Connected to the copper base plate exist six 6mm heat pipes, prime for effective heat dissipation. The fan that sits in front of the radiator seems standard. It’s a 120mm ball-bearing fan.

If you feel that this won’t provide your CPU with enough cooling, you can add an additional fan using the provided fan clip.

Overall, the Scythe Mugen 5 Rev.B delivers excellent cooling at a reasonable price. If you’re looking for a budget tower cooler, then we highly recommend this entry.

Deepcool has been producing quality computing peripherals and accessories since the late ’90s. It should not be a surprise to see one of their products on our list of the best Ryzen 7 5800X coolers.

Technically, the Assassin III falls under the Deepcool Gamer Storm product line which consists of gaming cases, cooling solutions, and other game-orientated accessories.

As the name implies, it’s the third entry in Deepcool’s Assassin series. Much like its predecessor, the Assassin II, the Assassin III is built like a giant tower cooling sandwich.

However, where the Deepcool Assassin III had red fans, the Assassin III has uniformly black fans. This means it will cooperate with the color scheme of most builds.

The Deepcool Assassin III essentially consists of two coolers connected in a tower cooling setup. It’s made up of two fans and two cooling blocks/radiators.

The fans are made with Deepcool’s (Gamer Storm’s) patented double-layer fan blade design, held to the radiator with an obsidian-like spoiler. The fins on the radiator are nickel-plated.

The base plate is built primarily from copper and has a convex mirror finish. Connected to it are seven heat-pipes.

That’s one more heat-pipe than the Scythe Mugen 5 Rev.B. Since the Assassin III is a tower cooler, you will need to ensure that it has enough clearance in your rig. Its dimensions are as follows: 161×140×165 mm.

Overall, this may be more expensive than the previous entry but it objectively outperforms it. If you can afford it, we highly recommend the Deepcool Assassin III.

Next on our list of the best coolers for the Ryzen 7 5800X comes the Arctic Liquid Freezer II 240.

It’s the first liquid cooler on our list. At the time of writing this guide, it cost as much as Deepcool Assassin III.

Arctic was founded in 2001 (as Arctic Cooling) and is located in Hong Kong, Germany, and the USA. They specialize primarily in cooling equipment.

One of the ARCTIC Liquid Freezer II 240’s more unique features is the VRM fan included on the cold plate housing. So not only will this cooler keep your CPU cool but your motherboard too. The VRM fan plugs separately.

Therefore, while you can control the CPU’s cooling through BIOS, you can’t do the same for the VRM.

Nevertheless, it’s fairly silent and cannot be heard over the rest of your system’s noise. The pump on this cooler is part of the block. The impeller can be seen near the cold plate.

To neaten up the setup, Arctic has chosen to run the Liquid Freezer II 240’s fans through the tubes that connect to the base plate. Much like the previous entries on this list, there are no fancy RGB lights to speak of on this cooler.

That’s one of the reasons this is one of the most affordable all-in-one liquid cooling solutions. This cooler uses a sealed water loop. You don’t have to worry about refilling it or adding anything to it.

Overall, you’re paying purely for the ARCTIC Liquid Freezer II 240’s performance when you purchase it. It can be said that it goes above and beyond its price tag in terms of performance.

Furthermore, you can always replace its fans, if you want something more colorful in the future. Nevertheless, this entry is definitely one of the best value for money 240mm AIO Coolers.

The spot for the most expensive cooler on our list belongs to the Corsair iCUE (pronounced IQ) H115i RGB Pro XT.

Corsair requires no introduction in AIO coolers market. You can find their H100i RGB Platinum SE version on our list of the best white CPU Coolers.

While the Corsair iCUE H115i RGB Pro XT is a perfect fit for the Ryzen 7 5800X, it’s compatible with a wide variety of AMD and Intel.

You can get them at 400 RPM to 2400 RPM. Even with the fan on full tilt, this cooler is still surprisingly quiet.

The controllability does not end at the fans. All 16 of the cooler’s RGB lights on the pump head are addressable and are sync-able with your other Corsair gear.

Everything about the Corsair iCUE H115i RGB Pro XT is sleek and beautifully crafted. From the radiator to the pump head.

They are made from a sleek black polished metal. The cold back plate appears to be constructed from copper.

As with the ARCTIC Liquid Freezer II 240, this cooler works with a closed loop and requires no maintenance.

Once you install it, you won’t need to worry about refilling or changing out the liquid.

Installation is relatively easy. However, the tight screws on the radiator will require you to use quite a bit of dexterity and strength to look them into place.

In addition to this, the wires can be a little tricky to route and work with.

The Corsair iCUE H115i RGB Pro XT is the best-looking cooler on this list. It’s quiet, customizable, and well built. The only thing that may discourage you from purchasing it is its price tag.

There you have it. In this guide, we explored four of the best coolers for the Ryzen 7 5800X.

You’ll notice that the picks in this guide were primarily tower and all-in-one coolers.

If you’re interested in a more compact solution, visit our guide on the SFF-friendly CPU coolers.

Below are some popular questions people ask regarding Ryzen 5800X and CPU coolers, with our answers.

No, the only Ryzen Zen 3 processor to come with a stock cooler is Ryzen 5 5600X.

You can take whichever route you like. AIO coolers look more pleasant but will cost more to provide the same level of performance as high-end air coolers.

Air coolers cost less than AIO coolers for roughly the same performance and have a comparatively easier installation process. Their main disadvantage is that they can’t always fit inside your chassis, especially if you got an SFF PC build.

That’s why it’s better to check the compatibility of such coolers with your case before making a purchase.

Can A CPU Die From Overheating?

Overheating can be harmful to generally all of your PC components, and the same is the case with CPU. Overheating can make your system unstable and shut down.

Even if it doesn’t die immediately, overheating for a long period can reduce the lifespan of your CPU.

Can You Install A CPU Cooler Without Removing The Motherboard?

Yes, you can. Any good aftermarket PC chassis comes with cutouts through which you can access the motherboard from both sides and remove the cooler.

After this point, you will start to feel throttling. Read our guide on lowering the CPU temperature for more info.