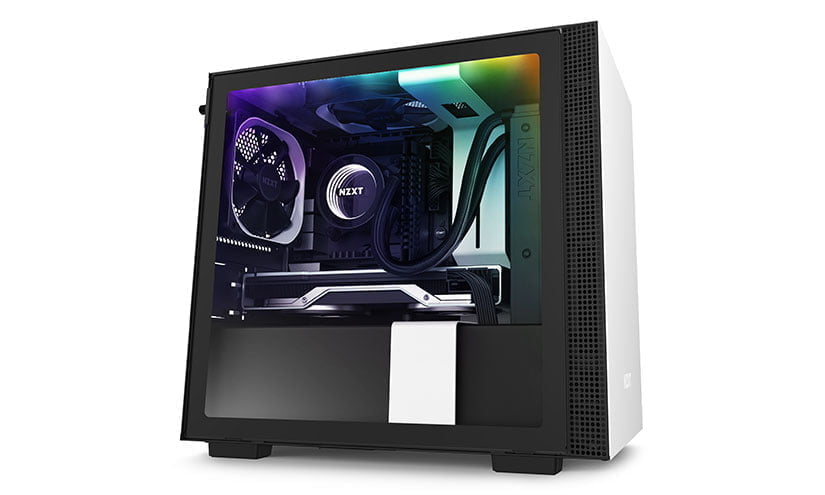 The NZXT H210i is a near-prefect mini-ITX chassis but its fan layout is weird to say the least.

It comes with two 120mm fans out of the box (one installed at the top and another at the rear) but both work as exhausts.

It means you’ll have a negative air pressure and dust will start to accumulate inside your chassis to make your PC components less efficient over time.

You can solve this potential issue by reconfiguring your fan layout.

Of course, it won’t have a drastic effect on your PC temperature but a small gain in return of a one-time work of 15-20 minutes doesn’t hurt either.

Where you should place your fans will depend on whether you want an air or AIO cooler, or if you have aftermarket fan(s) to install. That’s why we have discussed some of the common scenarios below.

Since H210 and H210i are practically similar, you can apply this stuff for the former as well.

Here, the 240mm rad will be installed at the front (with radiator fans as intakes) while the stock fans should stay at their original places. This way the radiator fans will take the fresh air into the chassis and complement the stock exhaust fans.

The NZXT H210i also gives you the option the install a 120mm rad on the front side.

Although we don’t recommend such rads, at least for midrange/high-end CPUs, the ideal location for them is lower-front area.

It’s because now the rad fan will take the fresh air from outside and push it towards the graphics card. This will make graphics card cooler which, in turn, will reduce the overall temperature of your H210/H210i chassis.

3. You have Aftermarket 120mm Case Fan

If you have an aftermarket 120mm fan as intake, you can install it at upper-front position. This will make the no. of intake less than the no. of exhausts, which will have a negative airflow.

To avoid this situation, remove the preinstalled fan from the top side and install it on the lower-front area as intake.

You can also check out our guide regarding aftermarket 120mm fans for NZXT 210i to have more information.

4. You have Aftermarket 140mm Case Fan

Having two 140mm intake fans at the front can be the best scenario in terms of airflow. This way you can keep the two 120mm fans at the top and rear as exhausts.

These were some of the common scenarios you can have regarding the optimal fan layout for NZXT H210 and H210i chassis. If you have any other configuration in mind, your best bet is testing.