Despite featuring the same 7nm architecture as its predecessors did, the 5600X offers 20-25% better single-core performance thanks to improvements like double L3 cache directly accessible per Core, lower latency, and higher clock speeds.

This huge performance uplift is partially the reason why 5600X (like its other 5000 series siblings) are selling like crazy and hard to be found at their original price. Out of all three 5000 CPUs, Ryzen 5600X is arguably the best one for gaming and provides the best value for money.

Since we have already talked about the best RAM memory for 5600X in another post, we decided to go with the graphics card this time.

Compiling this list was not easy by any means and we had to scour all the big online stores to only find a handful of GPUs that were available. 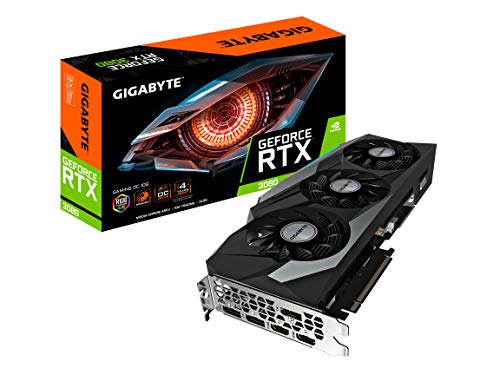 As you know, graphics cards are having serious demand and supply issues right now due to a variety of reasons. Thus, we weren’t too sure about whether to go for it or not. It’s also the reason why we had to rely upon one old-gen GPU because nobody knows for how long this shortage will last.

So without any delay, let’s start, shall we!

Released in November 2019, XFX RX 5700 Thicc III Ultra is the successor to the Thicc Ultra II and is aimed towards 1440p gaming.

Thicc Ultra II was a good GPU on its own but had some shortcomings. So XFX probably worked on the public feedback and released its successor only after a few months.

Heating dissipation was one area where it was criticized. This is the reason why Thicc III has two 90mm and one 100mm fans, instead of just two 100mm fans in the original.

It allows the Thic III Ultra to draw even more power which results in higher gaming performance overall.

Another change XFX has made for heat management is the extra-long heatsink which subsequently increases the overall length of the GPU.

So make sure to check the specs-sheet in your pc chassis before going for the purchase.

From the inside, it’s based on AMD’s 7nm NAVI architecture, and comes with an 8 GB GDDR6 memory, a base clock of 1935 MHz, and a Performance mode clock of 2025 MHz.

For noise reduction, it comes with 0db technology where the fans don’t start spinning until GPU comes under load. But even at full speed, these fans don’t make much noise.

For gaming performance measurement, we tested this card on games like Battlefield V, Shadow of the Tomb Raider, Metro: Exodus, Division 2, and Borderlands 3. And it crossed the 60 fps mark on all of them (except Metro: Exodus where it got 52 fps) on 1440p Ultra preset.

If there are issues with Thicc III Ultra, then those would be no ray-tracing (but it’s the case with practically all AMD graphics cards), and high power consumption which may force you to upgrade your power supply.

On the other hand, it offers excellent gaming performance for its competition, is PCIe 4.0 compatible, and comes with a dual-BIOS switch.

As suggested by its name, it’s based on the latest RTX 3070 reference card.

Powered by 8nm based Ampere Architecture, RTX 3070 is significantly faster than its predecessor, the RTX 2070.

Like many high-end GPUs these days, Twin Edge OC is a dual-slot card and requires two PCIe slots available on your motherboard. Unlike the founder’s Edition of RTX 3070, you get an 8-pin PCIe power connectors instead of one with 12-pins.

There’s no SLI support but considering the ever-decreasing popularity of multi-GPU setups, it’s doubtful that you’ll miss it.

The games we played with this GPU include Assassin’s creed odyssey, Control, Doom Eternal, Hitman 2, and Far Cry 5.

While it went above the 60 FPS mark at 1440p in all those games, it struggled to do so at 4K in demanding games such as Assassin’s Creed Odyssey.

But it was expected considering that Nvidia has marketed RTX 3070 as a 1440p graphics card.

It means you have to either go for the likes of 6800XT and 3080 for more performance push. Alternatively, you can lower the game settings on such games.

The power consumption is slightly higher than the founder’s edition but the difference is almost negligible.

Since it comes with a smaller cooler, it makes more noise than other RTX 3070 models (founder’s edition included) which can be an issue if you’re looking for silent operations build.

It also generates slightly more heat due to this smaller cooler which means your PC must have a good amount of airflow to keep things smooth.

There’s no RGB lighting and Dual-BIOS, but these two aren’t as big issues as the first two were.

On the contrary, the things we liked include a compact dual-slot design, improved energy efficiency, metal backplate, and relatively smaller size.

For the Ultimate 4K gaming experience, we have the RTX 3080 Gaming OC 10G by Gigabyte.

A part of the latest RTX 30 series, this card offers roughly 20% extra performance against its predecessor – the RTX 2080 Ti.

It is a premium GPU and you can notice it at first glance. It’s colored black for the most part which gets along with the gun-metal color used in some other areas, like the metal backplate.

This backplate has several cutouts which not only help the air to flow but also adds to the overall elegance of this card.

For active cooling, a triple-fan design has been used, where you get two 90mm fans and one 8mm fan.

A very small amount of RGB lighting has been implemented in the top area.

To check its gaming performance, we decided to go with the likes of Metro Exodus, Red Dead Redemption 2, and Shadow of the Tomb, etc. In all those games, Gaming OC 10G was able to cross the 60 FPS mark @ 4k settings.

Apart from the bulky design, and the fact that it’s almost impossible to get these cards at the original price these days, there’s no particular downside with Gaming OC 10G.

On the positive side, you get higher clock speed out of the box, efficient heat management, ‘stop-start’ technology (where fans stop spinning when not under load) and good performance leap compared to 2080 Ti.

All these things make it the best 4K graphics card for ryzen 5600X as of now.

Below are some of the popular questions people ask about their Ryzen 5600X CPUs and our answers to those questions.

Does Ryzen 5 5600X have integrated graphics?

No, the 5600X does not have an integrated graphics unit.

The only AMD processors to come with such graphics are the G-suffix APUs (such as Ryzen 5700G).

Before the Ryzen 5000 processors, the Ryzen 5 models were significantly ahead of their i5 counterparts in productivity apps but were slightly behind in gaming.

But AMD has made many improvements in their latest CPUs, resulting in Ryzen 5600X being way better than i5 10600K – in both gaming and productivity.

Yes, if gaming is your priority, there’s no need to go beyond the 5600X.

The higher-end CPUs such as 5900X and 5950X perform better than 5600X, but their price difference doesn’t translate well to the marginal boost they provide.

It depends on the games you play and their resolutions.

On the other hand, 5600X has been reported to consume a lot more power than the 3600 when overclocked. One apparent reason behind this extra power demand is that you can overclock it to 4.7 GHz – far more than the 4.2 GHz limit of 3600.

But it’s been reported that the Ryzen 5000 CPUs will be last to support AM4 socket. It means you can’t use your X570/B550-based motherboards with the next-gen (Ryzen 6000) CPUs.

If you are buying a CPU for just gaming, the 5600X would be enough. But if you want to do multitasking while playing games (such as streaming), then 5800X would be a better option.

Are six cores enough for gaming?

6 cores are more than enough for even the latest AAA titles and will continue to remain so for at least 2-3 years. You will fare much better if you use that extra money to invest in a better GPU.

Again, it depends on many factors, mainly the games and your desired resolution.