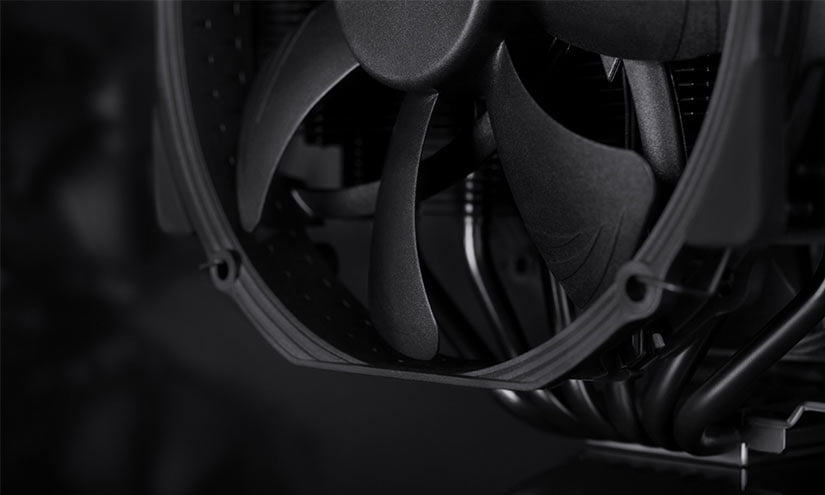 The i5-11600K is the latest addition in Intel’s i5 series and unarguably the best-valued CPU from the Rocket Lake lineup.

It costs significantly less than the Ryzen 5600X while offering slightly worse performance, making it an attractive option for budget PC gamers.

But one area where it’s not the best is the temperature. Like with all 11th-Gen processors, Intel has used the older 14nm processor here.

It’s not inherently a problem, but Intel is trying to increase their processors’ clock speed year after year to squeeze more power out of the same process. This higher clock speed leads to higher power consumption and higher temperature.

And the fact that you don’t get any bundled cooler here (unlike in Ryzen 5600X) means you have to be extra careful about the cooler you pair up with 11600K.

To make your job easier, we have scoured the web and found the best air and AIO coolers for this purpose.

Noctua is well-known for making high-end air coolers. But many people, including us, had complaints about the color scheme they used in the past. The off-white/brown scheme they use doesn’t match well with the rest of the PC components.

While it wasn’t a big deal for performance-centric guys, many others disliked it – with some calling it downright ugly.

So Noctua finally took notice last year and released chromax black versions of some of their coolers, including the one we have here: Noctua NH-D15S.

All the internal components, such as fans, anti-vibration pads, fan clips, and heatpipes, are covered in matte black. Other than this, it’s almost similar to the original NH-D15S. You get a dual-tower design with two 150mm-wide aluminium fin-stacks connected by six heatpipes. The top stack has 38 fins, while the lower one has 7.

You can pair each of those fin-stacks with a 140mm Noctua NF-A15 PWM fan (although only one fan comes out of the box).

The lower fins are recessed, allowing the D15S to have 65mm clearance for taller RAM modules in single-fan mode. In dual-fan mode, the clearance will be 45mm for a 120mm fan and 32mm for a 140mm fan.

You can also move the front fan upward to have more RAM clearance, but it’ll increase the cooler’s overall height, which may create issues with your chassis.

Many motherboards have their top PCIe x16 slot (where you put your graphics card) too close to the socket area, creating problems if the heatsink is large. Thankfully, the fins are slightly off-set towards the motherboard’s upper area, meaning fewer compatibility issues with your GPU.

The Noctua NH-D15S performs better than most air coolers (and even some AIO units) in both idle and under load. The 140mm fan remains silent, and you can barely hear its noise even under higher loads.

Weighing 1.3 KG and having dimensions 5.31 x 5.91 (depth) x 6.5 (height) inches, it is one of the largest air coolers in the market. So make sure to check its compatibility with your case and motherboard before making a purchase.

You can also check Noctua’s list of compatible motherboards/cases for more info.

One potential flaw we noticed here is that you have to remove the preinstalled fan first before installing the cooler, making the whole process slightly longer.

Like other Noctua coolers, this one comes with a small amount of thermal paste and has a six-year warranty.

AIO coolers have gained popularity in recent years, but many people still don’t go for them due to their higher price.

So the next cooler we have picked is the Arctic Liquid Freezer II 240 – a 240mm AIO that only costs as much as a high-end air cooler.

It consists of a 240mm radiator (two 120mm fans) connected to the CPU block and pump unit via braided tubes.

The lack of any RGB lighting and an all-black color scheme makes it look stealthy, which can good/bad depending on your preferences.

With 38mm width, the radiator is thicker than what you get with most AIOs. It’s made out of aluminium and has wider fin spacing that allows better airflow. It has two preinstalled 120mm fans connected to each other and have their cables already routed, meaning the installation is quick and easy. They work in push configuration by default, but you can flip them for a pull configuration as well.

The AIO coolers market is quite saturated – with companies experimenting with features that’ll make them stand out from the competition. One such example can be found here, with the VRM cooling fan on the cooling unit. It is a 40mm fan that slightly helps in cooling down the VRM heatsink of your motherboard.

During our testing, we found it to outperform all 240mm AIOs out there as far as lower temperatures are concerned. It fared better than even some 280mm/360mm units. With that said, it’s not the most silent cooler you can have.

We tried hard but couldn’t any particular flaw here, but there’s none. You can argue about the lack of RGB, but it’s more of a personal taste thing rather than a downside. Some gamers actually prefer non-RGB components.

In total, if you want an AIO cooling experience on a limited budget, then Freezer II 240 is a perfect match for you.

The next cooler of this roundup is Deepcool Castle 280EX.

It looks similar to the Deepcool Castle 240EX except for the larger radiator. The first thing you’ll note here is the large pump head. Not only this pump head supports RGB, but you can also remove its cap and replace the GamerStorm Logo with one of your own.

The radiator is slightly thinner with 27mm thickness, has aluminium fins for faster heat transfer, and has two Deepcool TF140S fans.

These fans have a 9-blade design, come with 400~1800 RPM speed and 97.03 CFM airflow, and have anti-vibration pads on mounting corners. They are rated at 40dbA noise level, meaning the emphasis is on better cooling performance rather than lower noise.

The tubing is 380mm long (wrapped in woven material) and bends quite well.

There are not too many cables to take care of, which makes the installation process pretty straightforward.

Another feature we liked here is the dedicated RGB header which can be handy if your motherboard does not have any RGB header.

The thermal performance is not the best but at par with most 280mm AIO units.

Like said earlier, it’s slightly louder under heavier loads. While it’s not intolerable by any means, you may want to adjust the fan curve for silent operations. And we would’ve liked RGB to be implemented in some other areas too.

Lastly, since this is a 280mm AIO cooler, you should check your chassis’ compatibility before making any decision.