A monitor is one of the most underrated factors in any gaming rig.

Most of the time people just focus on their graphics cards, processors, and motherboards, and nothing else.

However, things like CPU cooler and monitor also play an important role in defining your whole PC gaming experience. 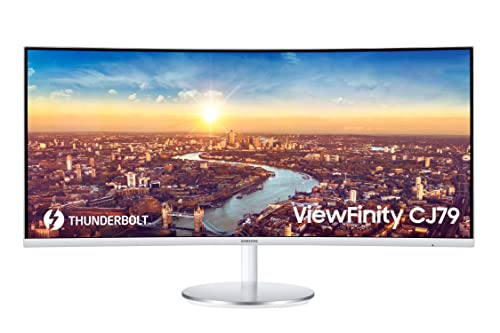 If we talk about monitors, in particular, they’re probably one of the three key factors in your gaming PC. It’s because no matter how beefy GPU you have in your PC, it’s your monitor that will display all those vivid graphics.

Each one of 3060 Ti and 3070 is targeted for high 1440p/entry-level 4k gaming and If you’re one of those lucky dudes who have the opportunity to lay their hands on these new beasts, your next job is obviously finding a suitable monitor for these cards.

And since we’ve recently written a monitor roundup for RX 6800/6800 XT, we decided to do one for Nvidia’s offerings as well.

These monitors have different screen sizes, different resolutions, as well as different prices. So that you can pick one according to your preferences.

The first monitor we have is the Dell S2719DGF. With a 144Hz refresh rate, FreeSync, low input lag, and a very fast response rate, it’s a really good 1440p option for beginners.

It has a dark grey finish with a minimalist look which is surprising because it’s geared towards gamers primarily. Its stand offers up to 130mm height adjustability, +/- 45° swivel, -5°/21° tilt, and 100x100mm VESA mount compatibility as well.

The OSD menu is simple, easy-to-navigate, and can be accessed through the hotkeys beneath the bottom bezel on the right side. There are seven such keys, including shortcuts to features like FreeSync, Dark Stabilizer, Brightness/contrast, etc., but you can replace them with other function shortcuts as well.

If we talk about the gaming-centric features, you have the three presets (FPS, RTS, and RPG) along with an on-screen timer, and a frame rate counter. We liked Dark Stabilizer in particular because it increases your visibility in dark areas of a game by changing the gamma curvature. On the other hand, we really missed the crosshair overlay here.

Based on a TN panel, S2719DGF features the standard contrast ratio of 1,000:1, a peak brightness of 350-nits, and 170° viewing angles. A relatively low contrast ratio means won’t get as bright colors as in some VA panels but a 1ms response time makes this monitor ideal for fast-action games.

The refresh rate can go as high as 155Hz, but you have to use a DisplayPort connection for this. On HDMI 2.0 and HDMI 1.4 connections, it will be limited to 144Hz and 60Hz respectively.

If you want to consume a lot of video content, there are some other monitors that will serve you better (because of no HDR and low contrast ratio here), but as far as the gaming is concerned, you’re good to go.

The next one we have here is the Samsung CJ791.

Like all modern displays, there are very thin bezels on the sides and top. These bezels, along with the stand, are colored silver which gives the whole monitor a very minimalist look.

It’s pricier than dell’s S2719DGF but it’s more or less justified considering how many extra goodies you get here.

The first one is Ultra Wide Quad High Resolution of 3440×1440 pixels spread over 34 inches of OLED display in a 21:9 ratio. The screen has a slightly lower 300-int brightness so make sure you don’t have too much lighting in your room.

On the input panel, there are two Thunderbolt 3/USB Type C ports, a DisplayPort 1.2 port, HDMI 2.0 port, and two type-A USB ports for connecting other hardware. You also get two onboard speakers which are good enough for casual usage but you will require dedicated solutions for anything more than that.

In order to reduce lag and remove screen tearing while gaming, it comes with FreeSync. The caveat here is that your FPS will be limited to 100 if you enable this feature.

The actual screen is based on a 34-inch VA panel with 3000:1 static contrast, 4ms GtG response rate, and a wide-gamut panel that covers 125 percent of the sRGB color spectrum. It’s supported by a slick stand that provides 36 degrees of tilt and 4 inches of height adjustability, and comes with a round base.

If we talk about the pros, then this display gives you extra space for more work, can display images from multiple inputs, and is far more color accurate than competitors. The major drawbacks in our opinion are the relatively average dark-grayscale performance and slightly skewed greens.

It comes with a sturdy stand that offers height adjustment (up to 110mm), tilt (-5°/15°), and VESA mount compatibility – swivel adjustment is absent though.

The screen itself has a relatively less curvature of 2300R and comes with an anti-glare coating to eliminate tearing.

As far as connectivity options are concerned, you get a DisplayPort 1.4, an HDMI 2.0 port, a dual-USB 3.0 hub, and a headphones jack. GSync and FreeSync support is available over DisplayPort, and HDMI connection is limited at 85Hz.

Another thing you’ll notice here is the lack of any built-in speakers. It’s not a big deal but they should’ve been included for the price you’re paying.

Although you can use this monitor for general purposes as well, gaming is the actual area where it actually shines.

Thanks to the high refresh rate, quick response time, and wide color gamut, it excels in every type of game you play on it. The 1000:1 static contrast ratio is lower than some VA panels which means the blacks won’t be as deep as you might expect them to be, but this is a general issue with IPS panels.

It costs more than 1500 bucks at the time of this review but worth almost every penny.

So these were some of the best monitors for RTX 3060 ti/ 3070 graphics cards. As we review more display panels, we may add or remove some options in the future. But as of now, these are our recommended picks.

How many monitors can RTX 3070 support?

Again, it depends on the games you play.
While there are some games (such as Battlefield V, Civilization VI, F1 2020, and Doom Eternal) where you can score 144+ fps @1440p resolution with 3070, the count would be lower on others, such as RDR2, Sekiro, Hitman 2, and Control.

Nvidia recommends at least 600W PSU for the RTX 3060 Ti. While some people online have reported the 500W PSUs to work fine, we recommend a 600W PSU so that you have headroom in terms of your system wattage.
For more information, you can check out our separate post about PSUs For RTX 3000 graphics cards.

Although the RTX 3000 GPU targeted towards 4K gaming is the 3080, you can achieve 60+ FPS at this resolution with RTX 3070 in games like Metro Exodus, Gears 5, RDR2, and Shadow of the Tomb Raider. It fails in doing so on games like MS Flight simulator and Control, so you’ll have to lower other settings in these games.
We believe that you should go for RTX 3080 in this regard. The games are getting more demanding with each passing day, and because 3070 runs current titles at 4K well, there’s no guarantee that it will do the same for future titles too.
Not to forget about the better GDDR6X memory type of 3080 compared to the GDDR6 memory in 3070.