But still, you can do a lot with this card provided that you also have a capable monitor.

Since we’ve already published our monitor recommendations for 3060 ti a while ago, we decided to do the same with its little sibling too.

Below are some of the best monitors you can have for RTX 3060. 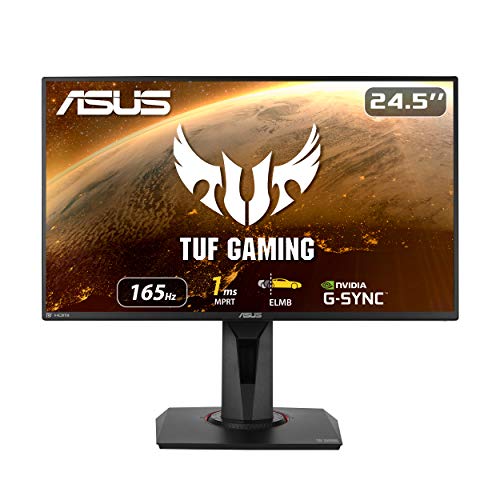 In case you’ve following this website lately, you’ll know that we love Asus TUF series and regularly feature their motherboards. But this is the first time, we’re reviewing their monitor.

Asus TUF VG259QR is a 1080p budget monitor, and with features like up to 165Hz refresh rate, 1ms response time, it promises to give a great value for the money.

As far as the connectivity options go, you get one DisplayPort 1.2, two HDMI 1.4 ports (all three inputs support 1080p up to 144Hz refresh rate), two integrated speakers (they sound OK but nothing extraordinary), and a headphones jack.

The OSD is user-friendly and can be navigated by a 5-way joystick on the backside of the monitor.

It also comes with Extreme Low Motion Blur (ELMB) that you can use to achieve 1ms Motion Picture Response Time. This feature can be used to prevent backlight strobing but can only be used with 100Hz/120Hz/144Hz refresh rates and will reduce the maximum brightness a little as well.

Alternatively, you can use FreeSync/G-Sync technologies to remove screen tearing but they won’t work with ELMB enabled.

Like every IPS panel, there are some areas on screen where you may notice IPS glow and backlight bleed but it’s very rare and you’ll easily get used to it.

Unlike other monitors we’ve discussed so far, this one comes with a 1440p resolution. We included this monitor as there are some titles that can give you 1440p resolution with 3060 GPU at medium settings.

It comes with black color scheme for the most part, with red color used in some areas. Like any modern display, it has thin bezels at the top and at both left/right sides. It’s sturdy for the most part but the stand feels a little flimsy.

Being a gaming monitor, it comes with RGB in some areas but it’s not aggressive in any way.

To prevent reflections, it comes with a matte anti-glare coating.

As far as the connectivity goes, you get a DisplayPort 1.4, two HDMI 2.0 ports, a headphone jack, and a single USB 3.0 port. The video input you choose is crucial because while you can achieve 10-bit color depth at 1440p 144Hz with DisplayPort, HDMI port is limited to 8-bit color depth at that resolution.

The LG 27GN800-B supports both FreeSync/G-Sync meaning you can use any of those technologies (depending on your graphics card) to remove screen tearing. It also supports 1ms Motion Blue technology to remove backlight strobing, but you can’t use it with FreeSync/GSync enabled.

On top of that, there are many gaming-centric features like Black stabilizer (improved visibility in darker in-game areas), crosshair overlays, gaming modes, etc.

The OSD controls are easy to access and you can also use On-Screen Control software to make those changes.

Our only issue with this monitor is the stand, which is poor as far as ergonomics go. It’s a tilt-only stand with limited range, meaning you don’t get any height adjustment and swivel adjustment.

What resolution is Best for RTX 3060?

It depends on what games you play. In some games, you will achieve this FPS easily; while in others, you’ll have to lower your in-game settings.

For most AAA games, no.