In case you want to know about our top pick right now, it’s the G.Skill Trident Z Neo.

But we would still like to stay here and complete the whole guide as there’s more to it.

AMD has always been a bit more finicky when it comes to what memory is used with its platform. So spending a bit more time researching and double-checking your motherboard and memory compatibility is definitely worth it.

The Ryzen 5 5600X is the new mid-range gaming chip from AMD, and to get the most out of it, you will need high-quality memory.

We have scoured the internet, researching and finding the best memory for this new platform and specifically the Ryzen 5 5600X. 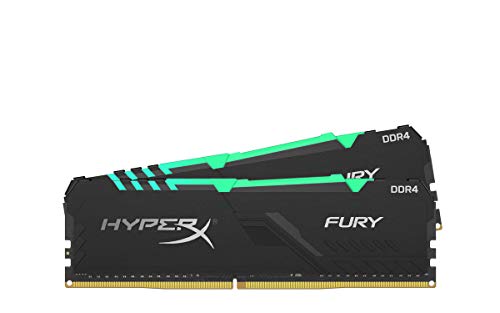 We have narrowed it down to our four favorite options, and why each of them is a great choice to pair with that shiny new processor.

Let’s take a look at them now, and explain why each would be a perfect match for your AMD system.

Corsair is one of the most trusted names in computer memory, and their Vengeance series has been a staple for many years now.

This model of Vengeance Pro RGB is one of the best they have ever produced, combining great aesthetics with stability and performance.

The heat spreaders have a nice matte black design and will fit in with any mainstream build.

The top of the RAM is RGB lighted, and can be set to many different color schemes to make your computer pop with color.

The heat spreaders are not super tall but are beefy enough to give them a substantial look and feel.

This memory is clocked at 3200 MHz. This is what we would call the “sweet spot” for the Ryzen platform.

It is the speed that will give you high-quality performance and still come in at a reasonable price.

AMD is known for needing decent RAM to get the most performance, and at 3200 MHz, you will not be handicapping your system at all.

The Corsair Vengeance RGB Pro memory has a timing of C16, which is considered as standard for DDR4 memory these days.

It comes in a 16GB package of two 8GB sticks. That is the optimal capacity to pair with the Ryzen 5 5600X and will provide enough capacity to not bottleneck the rest of your system.

If you want more of that RGB bling, you could always buy another set and put all 4 in your system for maximum looks. With that said, we generally don’t recommend 32/64 GB RAM for a 5600X.

HyperX has been making a name for themselves as a standalone brand for quite some time now, both in the hardware components and peripheral markets.

This set of Fury memory shows just how far they have come over the years.

This memory features a great RGB design and fast speeds to give you the complete package to install into your system.

One word describes this memory: minimal. While it does feature a nice RGB top line, the overall look of this RAM is super simplistic.

The black metallic finish on the body and the silver HyperX logo are a regular feature on their RAM lineup, just with that bit of added flair from the RGB on top.

HyperX has this memory kit rated at 3200 MHz. As stated previously, this is exactly the spot where you want your memory to be on the new Ryzen processors.

This gives you plenty of speed to pair with the lightning-fast Ryzen 5 processor, and will not hinder its performance in any way.

Once again we see a set of memory with timings of C16. At this price point and quality level, this is exactly what should be expected.

Timings of 16 are perfectly adequate to make your memory nice and snappy.

HyperX created a nice match between speed and timings to give this RAM an overall excellent performance profile.

This set of memory comes in at 16GB in capacity. While 8GB used to be our recommended amount in previous generations, now that Ryzen is more mature, 16GB should be the amount you pair it with.

With programs and games using more and more resources as technology advances, this number is likely to keep going up as we progress to newer hardware.

Patriot is one of the oldest brands in computer memory, and you can tell when you use their products.

Years upon years of research and development have turned them into one of the most reliable makers of RAM in the world.

The design of this memory is what is going to turn some people off of the kit. It is a shiny red and black metallic with no added RGB.

That means if you are building a system that doesn’t incorporate the color red, this memory is going to look very out of place.

The overall design is fine, but forcing people to use one specific color is not something most modern companies are doing.

This set of Viper 4 memory is clocked at 3000 MHz. We would consider this the minimum speed we would use on the new Ryzen platform.

Over 3000 MHz is a must, and this just hits the minimum requirement.

That said, it feels quick, and you should not notice any slowdown running it versus the competition.

Like most other RAM in this price and performance comparison, Patriot has this RAM kit timed at C16.

With the 3000 MHz speed, a timing of C16 is absolutely fine. This allows you to browse and game on your computer without any noticeable slowdown.

Another common theme with our Ryzen memory suggestions is the 16GB capacity recommendation.

This kit is 16GB and fits right in with our recommendation. Especially given the nice budget price tag of this RAM, you will not be disappointed by going with the larger capacity.

G. Skill is one of the largest sellers of memory in the world. They produce a ton of different SKUs and memory kits for all platforms. But this set of Trident Z Neo is special as it was engineered specifically for the new Ryzen 5000 processors.

The sleek brushed metal body and the sharp diagonal lines give this RAM a futuristic look that will be highly appealing to many.

Add in the perfect RGB lighting on top and you have one of the best-looking sets of RAM out there.

This RAM is blazing fast, clocking in at 3600 MHz! This makes it by far the fastest memory on this list and perfectly optimized to work with AMD’s new motherboards and processors.

This memory comes with a CL18 timing. While not as fast as the other kits on this list, the difference between CL16 and CL18 (especially in gaming) is virtually non-existent.

It more than makes up for this small shortcoming with a faster overall speed.

Once again we have a kit with 16GB inside. If you decide to do memory-intensive tasks such as video editing on your rig it may be worthwhile for you to double up on this and get a full 32GB.

Those are the four best options for memory when it comes to the Ryzen 5 5600X, and the choice will come down to your budget and personal preference.

Any of the four is more than capable of powering your gaming rig or even your everyday computer.

As you have seen, they all have their pros and cons, but with the four options, one should stand out to you as the perfect match for your system.

In the end, the choice often comes down to brand loyalty. If there is a brand on the list that you trust more than the others, that will likely sway your opinion.

We have given you four different brands just for that reason, as we want you to have the best choices possible. In case you’re looking for more 5600X-compatible hardware, you can go to our dedicated articles for Ryzen 5600X-compatible AIO coolers and motherboards as well.

Even in productive apps, it manages to beat the trio of 3600, 3600X, and 3600XT by roughly 15%, which is quite impressive considering AMD hasn’t made no drastic changes from the last generation.

You can go beyond that as well, but the performance difference will be minimum, and you wouldn’t be able to notice it easily.

It would be sufficient for even the heaviest AAA games these days, and you don’t have to upgrade for at least 2-3 years.

If gaming is your focus, we would recommend the 5600X as it clearly performs better than 3700X, despite having fewer cores and threads. It’s mainly due to its better single-thread performance and better power efficiency.

In productivity apps though, results get quite close and both of these go neck-to-neck against each other.