If you’re in bit of a hurry, our top pick is G. Skill Trident Z Royal.

The Ryzen 9 is a top-tier series in AMD’s CPU hierarchy, with Ryzen 5900X and 5950X as its latest additions. 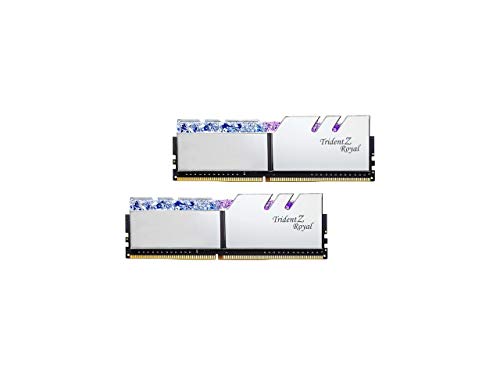 Both of them are great in their own right and perform excellently in gaming as well as productivity. While the 5900X are geared towards gamers and content creators, the 5900X is more inclined to workstation tasks since even the heaviest AAA gaming titles can’t utilize these many cores.

But as good as both of these processors are, you can’t get the most power out of them without having other suitable components as well. Ryzen CPUs are well-known to work better with high-speed RAMs and 5900X/5950X are no exception to this rule.

Today, we’ll be taking a look at four different RAM kits, and determining which of the four might be the best pick for your next PC build, when you pick up either a Ryzen 9 5950X or 5900X.

As far as the aesthetics go, you would find it hard not to admire these sticks. They come with gold-colored aluminum heat spreaders.

Some companies make the spreaders overly large in order to reduce the temperature levels.

Although it indeed lowers the RAM temperature, their large profile creates some compatibility issues in SFF builds. Thankfully, this is not the case here, as G.Skill has kept the size within the check.

Using this app, you can control eight LEDs on each of the modules. Not only that, you can change the brightness level as well. Since these sticks get power from the DIMM slots, there’s no extra wiring for the RGB.

Despite coming in with 4000 MHz speed out of the box, there is some headroom for overclocking (thanks to Samsung B-Die IC), and you can go to even 4266 MHz. But still, we recommend it to keep it at the factory speed to avoid any stability issue that may arise in the long term.

What does it mean?

Well, some apps benefited from this higher speed memory, such as Handbrake, while others barely showed any improvement.

The same is the case in gaming, where some games like Metro: Exodus and Shadow of the Tomb Raider showed noticeable FPS improvement with this RAM while others, such as Battlefield V, perform just as they would with slightly lower RAMs.

So if you’re a little tight on budget, it would be better to look at other options from this roundup.

The HyperX Fury HX436C17FB3AK4/32 is the second-fastest RAM kit featured on this list, offering speeds of up to 3600 MHz.

The RAM kit offers a grand total of four RAM modules (with 8 GB memory each) which is both good and bad.

That’s because although you get 32 GB memory upront, having all four of your DIMM slots means limited future options.

On the other hand, this RAM kit offers spectacular speeds as well as RGB lighting, which is always great. So at the end of the day, it’s up to the consumer for what they believe is more important: memory or speed.

This RAM kit is also very fairly priced, with it just over two hundred USD at the time of this post.

The G.SKILL TridentZ RGB F4-3200C14D-32GTZR is an excellent middle-ground for RAM.

This kit offers some excellent speeds, with up to 3200 GHz and includes two RAM cards of 16GB each. With two 16 gig modules, it leaves room for additional cards down the road if you’d ever have the desire to fill all four of your motherboard’s RAM slots.

Additionally, it also features some very pretty RGB lighting. Its unique heatsink design also sets it apart from competitors by looking truly aesthetically pleasing, with or without RGB lights turned on.

The only real downside is its high price point; currently still sitting at over 200 bucks, this RAM kit is not cheap.

If you were to look elsewhere, you could easily find other RAM kits of equal speeds for half the price or less.

This RAM kit is much more intended for PC builders looking for kits with high performance in addition to a nice visually pleasing look.

It’s a tiny bit unfortunate that the RAM’s maximum speeds are only 3000 MHz, while other kits on this list can go up to 3200 MHz and 3600 MHz, respectively.

This isn’t a huge downgrade, as the sheer amount of memory is still very good, but it is worth pointing out that it doesn’t offer the fastest speeds.

It also features some very pretty RGB lighting, and with all four cards installed together, they certainly make for a beautiful sight to see.

The kit is also very fairly priced, with the whole 64GB package clocking in at under $300.

For just over 50 bucks more than the G.SKILL TridentZ RGB F4-3200C14D-32GTZR, gamers get double the amount of RAM with just a very minor downgrade in speed.

This RAM kit is perfect for anyone that wants to fill out all of their RAM slots day-one.

While it might look very expensive, purchasing all four RAM cards at once will save the consumer money in the long run, over buying the RAM cards individually.

Overall, you really can’t go wrong with any one of these RAM kits discussed today. They all have their own positives and negatives, and the best option for you simply depends on your preferences.

If we were to pick one, we’d have to go with G.SKILL TridentZ RGB Royal F4-4000C15D-16GTRS: it offers two 16GB RAM cards with excellent performance, while also looking great visually and offering great RGB lighting.

With that said, each and every one of these RAM kits are great and all come recommended by us. If you’re interested in reading further about these processors, you can check our Ryzen 5900X/5950X motherboard guide as well.

Both Ryzen 5900X and 5950X are flagship processors and designed to dominate heavy AAA titles as well as productivity apps.

The 5900X will go well with 16GB RAM because most games have a recommended RAM size of 8GB these days. So 16GB will make sure you remain ahead of the curve and ready for future titles.

The 5950X is targeted more towards the content creators and professionals, so we would recommend a 32GB RAM for it.

Yes, you can use all 4 DIMM slots of your motherboard but make sure to use the modules of the same speed, same size, and same brand for optimal performance.

In Dual-channel platforms like AMD’s AM4, using all four RAM slots instead of two (using 4×4 GB RAMs instead of 2×8 GB RAMs, for example) can result in slightly higher performance in some games.

Although the Ryzen processors are compatible with a wide range of RAMs, not all of them are suitable of these CPUs.

These processors are designed to perform well with high-frequency RAM sticks, it’s becoming more and more true with each passing generation.

According to this TechSpot article, 3600 MHz CL16 is the ideal memory type for Ryzen 5900X and 5950X, while other reviewers have recommended going as high as 4000 MHz.

In our opinion, anything equal to or greater than 3600 MHz will be good.

Can your RAM die?

Like all of your PC components, the RAM will die eventually. But it’s a super long process and will take a lot of years in normal circumstances.

Some of the factors which play role in RAM dying include heat, power surges, low-quality power supplies, and low-quality motherboards.

No, if a RAM has more memory than what’s the minimum requirement for a game, it’ll be good to go regardless of its size.

A higher-speed RAM will get you more FPS than lower-speed RAM, but its effect will be minimal and will vary from game to game.