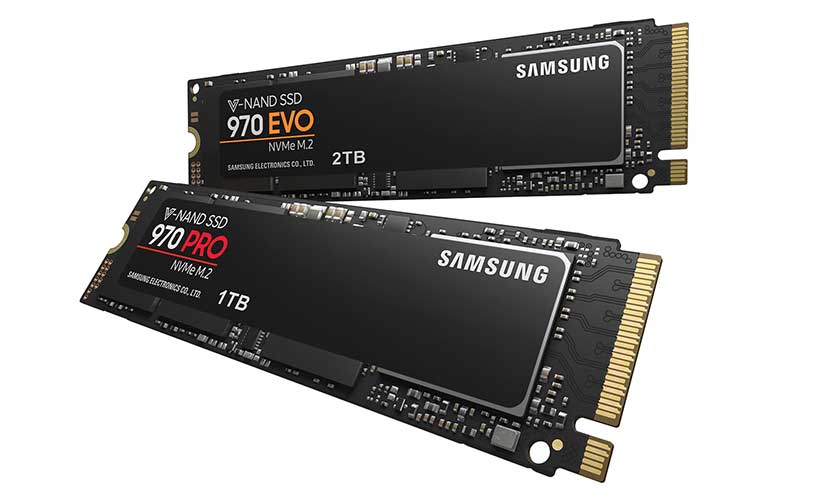 With all other components being equal, SSD is the single biggest factor that determines your PC’s performance.

Not only SSDs give you better read and write speeds, but they also have a better life expectancy, provide better OS/apps loading time, consume less power, and come with a smaller footprint compared to the HDDs.

These are some of the reasons why people are rapidly switching towards SSDs. For a long time, hard drives had the advantage of being cheaper. So people were using them as the backup storage for movies/games.

But now, thanks to ever-decreasing prices of SSDs, even that advantage is diminishing.

Samsung is a big brand when it comes to SSDs, with a long history of premium options. The 970 EVO, 970 EVO Plus, and 970 PRO are three popular SSDs in their lineup. But since all of them have slightly similar name and specs, choosing one over the rest can be difficult. To help you guys, we have decided a have a comparison between these three.

Here we’ll test the 1 TB versions of these SSDs.

All three use V-NAND technology, have a Samsung Pheonix controller, and come in M.2 2280 form factor. Also known as Vertical NAND (or 3D NAND), V-NAND is the SSD technology using which flash memory call layers are stacked vertically on each other. This technology results in more storage size in the same space, faster read/write operations, and lower production cost.

The TBW rating is the amount of data (in TeraBytes) you can write on an SSD before its warranty voids.

For example, if you write 250 GB data on 970 EVO every day, it will take you more than 13 years to hit the 1200 TBW mark. While the content creators and videographers write this high amount of data on their drives every day, average PC users don’t do such tasks most of the time.

So a 600 TBW is more than enough for most people.

As good as these numbers look, these are just official stats.

SSDs come with an SLC cache buffer that can quickly transfer a short amount of data. But once you transfer a file larger than that buffer, the workload increases and the transfer rate decreases.

The sustained sequential write performance is a better indicator in this regard. We transferred data through 970 EVO, 970 EVO Plus, and 970 PRO for 10 minutes and found their average sustained write speeds to be 1285 MB/s, 1705 MB/s, 2693 MB/s, respectively.

Other than this, we played different games such as Shadow of the Tomb Raider, GTA V, Borderlands 3, Red Dead Redemption 2, and Far Cry 5 on these SSDs. Although all of them performed well, it was 970 EVO plus who took the lead with roughly 10% faster loading times than 970 EVO and 5% faster than 970 PRO – on average.

Power consumption is not an issue for desktop users, but you should note it if planning to use these SSDs on your laptop. While both 970 PRO and 970 EVO Plus consume almost 3.5 Watts while copying data, the 970 EVO consumes 4 Watts.

The 970 PRO is currently priced significantly higher than both EVO and EVO Plus, but since the performance level is only slightly better, paying more money is certainly a no-no.

That leaves us with two options: EVO and EVO Plus.

EVO Plus performs quite better than the EVO and is only $15 more expensive. This makes it the best bang for buck SSD out of these three.